Back to all posts

Havin' A Drink With Dreadnaught - Essay by Geoff Logsdon 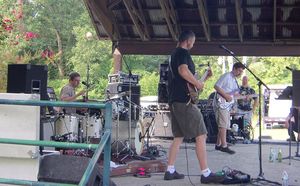 Back in 2012, Dreadnaught was invited to perform at ProgDay in Chapel Hill NC.  In the midst of brutal high 90s temperatures at 10 AM on a Sunday morning we took the stage and delivered what we considered to be a spirited, Dreadnaught-y set.  Two of the sound engineers, Jay Taylor and Geoff Logsdon, were laughing along with us the whole time, and their feedback and enthusiasm was a big part of what set us off on the path that led to our releases in 2013 (HAVE A DRINK WITH THE DREADNAUGHT), 2015 (GETTIN' TIGHT WITH DREADNAUGHT), and 2017 (HARD CHARGIN').

HAVIN' A DRINK WITH DREADNAUGHT by Geoff Logsdon

This has happened to you before.

You feel a familiar, cold, scratchy sensation on the left side of your face... as your consciousness slowly floats to the surface.

Your vision gradually clears... and you find yourself eye-level with the pavement. Once again.

You struggle to your feet, and find yourself enveloped in pea-soup fog.

If you owned a watch, the hands would be frozen.

The blood trickling from your nose and lip is annoying, but not a big deal.

There is a half-full, half-pint bottle of 100-proof Mr. Boston in your coat pocket... which you prudently polish off while pondering your next move.

You hear a cry in the distance. They sound like screams of pain, tinged with a touch of enjoyment. You walk through the fog toward the sound of the screams.

The cries get louder.

You find the source, down an alley, to your left. The fog is gone. Your vision is fuzzy, but you are seeing clearly.

Upside down on a meathook in the alley, is Dennis DeYoung... screeching in Broadway-worthy yowls. With that voice. And... POW!

You see Duane Allman clock Dennis in the balls with a Grand Slam Carlos May model Louisville Slugger.

Why you know this specific, arcane information about the bat Duane is wielding, is unclear.... but you know it, regardless.

Duane sees you, smiles, and shouts, "Where you been, brother? That band I want you to see is gettin' ready to go! Go get a drink!" And POW! Again. And again.

You watch for several moments, blank-faced... then nod, with one of those "hmm" faces.

Relieved that nothing of consequence is occurring in the alley, you stumble a few steps forward... and find yourself in front of a bar, called "The Brain Cell.”

But the cute graphic of a brain behind bars strikes you as oppressive and contradictory.

You'd think whoever was in charge would fix that. Ah, well.

But, Duane said to go in... and he called you "brother," which is pretty damn cool, come to think of it. So in you go.

There is a band, "Obscured By Clowns," finishing their set when you walk inside... 3 guys.  All playing calliopes, smoking weed. Playing "The Nile Song.”

Uh… wow, you think... did I miss something? Or did I get here just in time?

You wonder, but not for long. As you stare at the stage through the weed haze, you see three extremely handsome fellows begin to quietly set up their equipment. They look familiar. If not in this life, you have undoubtedly had a run-in with them before.

As if to confirm this intuitive thought, the drummer points a stick at you, winks, smiles, and mimes a "glug" motion. You smile back.

Just then, a bespectacled guy onstage, with 5 shirts on, mutters, "Need my bass.”

A man suddenly appears out of the darkness, from behind the PA speakers. He is dressed in a World War I pilot's uniform. He is here in the bar, alive, moving in real time, but his body is in black-and-white. You recognize him, from old war photos. He has a beautiful bass, except for the compromised varnish on the back. It looks like it's been melted off, somehow.

He hands the bass to the gent onstage who perks up, and says, "Thanks Eddie!"

You turn to the bar to order a drink... but you pause.... you are blocked from the bar by a rolling, massive punch-up.

Peering into the dust cloud, you can pick out John Entwistle, Steve Howe, Chet Atkins, and Janis Joplin. It is a real-life version of an Andy Capp bar brawl, a large ball of chaos from which fists, faces, and feet periodically emerge, from a massive puffy cloud of dirt and dust, of indeterminate origin.

Even though it is taking place right in front of you, they roll by in slow, violent motion.

You notice as they roll by that white X-shaped bandages appear on their injuries... even though the scuffle never ceases.

Just then, with no introduction, the band onstage begins their set. They open with a number called "Roopy, The Son Of Sons," which is very short, and curiously, composed entirely of rests. It is a quiet number. It ends by consensus to rapturous applause... and boom!

The band thunders into a wickedly intense 12-minute version of their unreleased Number One hit, "Who's Got The Pox?"

Hearing the band tear into this number, the Andy Capp combatants instantly decide to reconcile and decide a round of pints is in order. Janis declines the pint and raises a Southern Comfort toast to her punch-up pals for trying to give their best in a fistfight. A laughing Tony Levin, sitting at the bar, picks up the tab.

You finally take a seat at the end of the bar. A lanky fellow in cowboy gear next to you turns around and says "Hey, it's me, Hank! Good to see you, friend! Don't tell Miss Audrey you saw me here!"

If you did know Miss Audrey, whom you don't, you certainly would not rat him out.

Hank turns back to his conversation with Jeff Tweedy, Isaac Asimov, and Tony Iommi.

A socially inept barmaid gives you a look of recognition and brings you a Mason jar of peach moonshine, complete with peach slices.

She stares at you for a moment... and inexplicably tips you 20 bucks. Then you have a slug of the greatest moonshine ever known to man. You have several more glorious slugs. You feel quite at home, now.

Suddenly you notice, at your right, the most beautiful woman you have ever seen, in a minidress, with long, flowing black hair. You are unable to not stare. She smiles at you, and says "Hi, I'm Vida." You are paralyzed, and turn back to your Mason jar.

A deep laugh you recognize makes you glance to your left. At a shadowed table in the corner you see Frank Zappa chatting over coffee with a guy who looks like an Italian gangster. After two seconds, you realize it is Igor Stravinsky, showing Frank his mugshot.

Something moves in Frank's lap... it's a baby polar bear, on his back, wrapped in a poncho, smiling. It's Knut. Frank is cuddling him and scratching his belly.

Just then the cool-looking guitarist onstage announces their next number, "Teddy Eats A Hot Dog," which is as beautiful and intricate as anything you have ever heard.

Duane appears behind you... a tad sweaty... his work done, or just taking a break, perhaps. He claps you on the back and says, "I'm so glad you made it, brother! Isn't this band great? They're called Dreadnaught. You should hang around, and have a drink with Dreadnaught."

He waves to the band, who instantly play 4 bars of "In Memory Of Elizabeth Reed," then go back into "Teddy."

Peering through what is left of the weed smoke, Duane spots Charlie Christian at a table digging the band. He takes off to say hello, and talk shop, you imagine.

A bit of fresh air to clear your increasingly clouded head seems to be in order at this point...so you step outside. The fog outside has returned.

You can't see two feet in front of you... but it feels good to walk.

Then, somehow, you know he is coming. You brace yourself. The mop of black hair. The sweatshirt emblazoned with a target. It's him. He is 20 years old. He doesn't see you. The two of you slam into each other, in the fog.

Keith grabs your arms and looks at you with that innocent, genuine smile. He is at his best… healthy, and jovial.

He produces a half-pint bottle of vodka and takes a pull. As he hands you the bottle, you both hear the strains of "905" coming from the band inside the bar.

"AHH! I musn't miss this!!! John should be inside, yes?" Before you can answer, he bolts past you, down the street toward the bar.

Alone, standing in the fog, you take the Keith-mandated shot from the bottle of vodka, then drop it in your coat pocket. You'll whip it out later, when you, Duane, Keith, John, Charlie, Hank, and everyone, raise a toast, and have a drink with Dreadnaught.

That is the last thing you remember.

This has happened to you before.

You feel a familiar, cold, scratchy sensation on the left side of your face, as your consciousness slowly floats to the surface.

Your vision gradually clears... and you find yourself eye-level with the pavement. Once again.